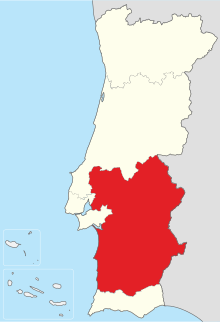 Alentejo is a south-central area in Portugal. The name, “além do Tejo” literally means “over the Tagus”. The area is bordered to the north by the Tagus, to the north the Centro region, to the east by Spain, to the west by Lisbon and the Atlantic Ocean and to the south by the Algarve.
The most important cities are Évora (capital), Portalegre, Beja and Sines. It is a sparsely populated region.

Topographically, the landscape varies greatly, with the undulating fields in the south to granite hills that border Spain to the northeast. In order to cover the water requirement, a number of dams have been built. The best known is the Alqueva dam in the Guadiana river, creating a lake of 250 km².

Alentejo is called the “bread basket” of Portugal, it is an area with open land with undulating fields and fertile soil. There are a few cities and a lot of very small villages. At the hills near Estremoz are often marble quarries, where white, gray, black and pink marble is found.

Because a part of Alentejo lies along the Spanish border, forts were built there. The descendants of the Bragança family, who ruled Portugal for years, still have large walled castles. They often stood on hilltops, so that signals could be passed on to each other.

The cork oak is a protected tree species. The harvesting of cork takes place once every nine years. Corks are made of the bark. Less known is that the bark can be boiled in water. The volume then increases by about 30%, the cork then becomes very smooth and can be cut into very thin slices. These slices are stuck on plastic after which handbags, wallets and other utensils can be made. The Alentejo is the largest cork producer in the world.
The holm oak is also a protected tree species. In the region many very old specimens can be found in vast fields. The holm oak is one of the symbols of the region.

With thanks to M. van der Poel and R. Prijs for being allowed to use some of their photos.