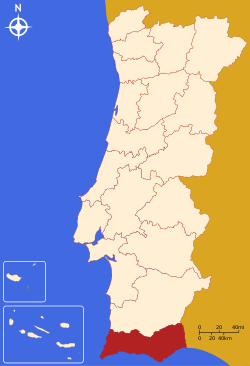 The former province of Algarve coincides with the current district of Faro. This covers the entire width of the south coast and its capital is the city of Faro [1].
In the north Algarve is bordered by the province of Alentejo, on the east side by the Rio Guadiana, a border river with Spain and on the south and west sides by the Atlantic Ocean.
The name Algarve comes from the time of the Moorish occupation of the Iberian Peninsula, the region was then called “Gharb al-Ândalus” or also “the west of Andalusia”. The Arabic “Al-Gharb” means “the west”.
The Algarve landscape is very varied. The coast has the well-known rock formations to the west of Faro with small beaches and east of Faro lagoons and kilometers of sandy beaches.
In the more than 80 km long coastal strip to the west of Faro with places such as Albufeira, Portimão and Lagos, tourism is particularly important, but nowhere has the crowded Spanish costa originated. Cities like Lagos and Faro have a real old town and also the famous Albufeira has kept its cozy feeling because no extreme high-rise has taken place. The hilly interior of the Algarve is just behind the coast and is still virtually untouched. The highest point in the Algarve is the Fóia with 902 meters. At certain points on the Algarve coast there is a real wadden region, which floods at high tide. At high tide the water is deep enough to enter.