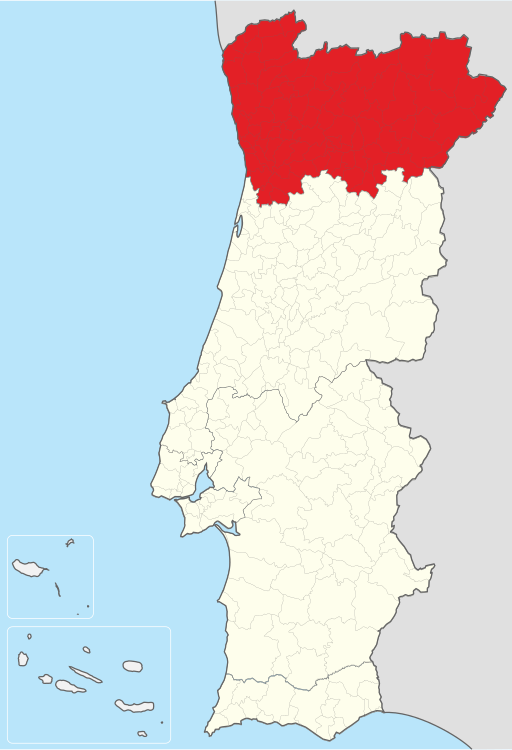 The area north of the Douro River consists of three areas: Minho, Trás-os-Montes and Douro (with Porto).

Minho the region of small-scale agriculture, history, religion and folklore. Thanks to regular precipitation in the spring and autumn, Minho is the greenest region in Portugal. In the valleys grow the grapes for the characteristic Vinho Verde. Minho, in the far northwest of Portugal, counts many attractions, such as the holy city of Braga and the medieval Guimarães. For nature lovers and hikers, the impressive nature reserve Parque Nacional da Peneda-Gerês is a must.

There are many undiscovered beaches on the Costa Verde. Slightly more touristy resorts are Esposende and Ofir. The resort of Viana do Castelo is beautifully situated at the mouth of the river Lima, in the shadow of Monte Santa Luzia (195m). The charming city is an atmospheric combination of beach, fishing port and history. Viana do Castelo is famous for its folk festivals and age-old costumes. A wonderful place to spend a day strolling through the old streets and picturesque squares.

With more than 30 churches, the Episcopal Palace and many religious festivals, Braga is the holy city of Portugal. Special is the pilgrimage site Bom Jesus do Monte located just outside Braga. The church can be reached via a gigantic double zigzag staircase of 686 steps, decorated with sculptures, chapels and fountains. A more comfortable way upwards offers the ‘elevador’ or funicular Railway.

A famous tourist attraction in Minho is also the Citânia de Briteiros. The impressive excavation, a settlement from the Iron Age, has been partly reconstructed.

If you want to know more about this special white or red Portuguese wine, then drive (part of) the vinho verde route, Rota dos Vinhos Verdes. This tourist, signposted route has been mapped out by the production area of the vinho verde.

An eldorado for hikers and nature lovers is the 700 km2 national park of Peneda-Gerês on the border with Spain. Wild nature and rugged mountain ranges, lush forests and steep ravines alternate with traditional villages, small-scale agriculture and green hills. The flora and fauna (including wolves) are of great beauty. Crossing the area, the Romans built a paved road 2000 years ago: the Via Geira. Parts of this, including Roman columns and milestones, have been preserved. Also worth seeing are the traditional villages Soajo and Lindoso, particularly known for their beautiful espigueiros.

Characteristic of the landscape of the Minho, northern Portugal are the so-called espigueiros. In these storage sites made of wood or granite, the farmers keep the corn or grain safe for moisture and vermin. The buildings, also with a cross on the roof, are sometimes just tombs.

Guimarães, place of birth of Portugal

The first capital of Portugal, Guimarães, still breathes the atmosphere of the Middle Ages. In this particularly cozy town it is wonderful to walk through the lively, narrow streets. The historical square Largo da Oliveira is also atmospheric. Worth seeing are the large castle from the 10th century and the nearby Gothic palace Paço dos Duques de Bragança.

The traditional town of Ponte de Lima is best known for its beautiful Roman bridge over the Lima River. The large weekly market is also worth a visit.

Trás-os-Montes (‘behind the mountains’) is the most remote region of Portugal. A mountainous region in the far northeast of the country. The area is dominated by granite mountain slopes with scrub. Scattered here and there in the valleys are many small villages and the larger towns of Chaves and Bragança. Characteristic of the landscape of Trás-os-Montes are the horseshoe-shaped pigeon houses. The pigeons serve as food. The feces of the birds are an important fertilizer for the soil.

Chaves
The town of Chaves (“keys”) is known for its Roman bridge over the river Tâmega, the smoked ham ‘Presunto de Chaves’ and its natural hot springs. In the caldas, water bubbles up from 73 ° C. The water would have a healing effect.

In Trás-os-Montes are three nature reserves:

Parque Natural do Douro Internacional.Located in the valley of the Douro River with its huge gorges, on the eastern border between Portugal and Spain. Port grapes and olives grow on the sides of the river.

Across this fertile green area, the river of the Douro (‘golden river’) runs with thousands of vineyards in deep valleys. Porto is the birthplace of port wines at the mouth of the river.

With thanks to J. Spanjersberg and Petra & Jack for using their photos